Giant Steps is a school & therapy centre that builds the skills and abilities of children with autism through academics, specialized therapies, life skills and inclusion

Where are they now?

Giant Steps is very proud of our graduates who have attained many skills and are thriving as contributing members of their families, schools and communities.

Read on to hear from 3 of our graduate families whose children are now thriving as adults. 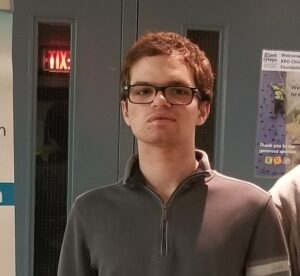 When my son Christopher started at Giant Steps, he had severely delayed speech, many sensory, behavioural and learning issues that affected his day to day functioning, low muscle tone, and he made no eye contact. Giant Steps provided him with the specialized therapies he needed to improve in all these areas and a modified academic program that addressed his specific learning needs. As well, as he progressed, they directly supported him in our neighbourhood public school.

I really felt like our family had won the lottery with Christopher’s admission to Giant Steps, and we still feel that today. Christopher is now 20 years old. He graduated from high school with a full diploma and is currently in the PEAK program honing his work skills. He has a part-time job, uses public transit and is working on his driver’s licence. Christopher has developed many interests and hobbies which keep him busy and engaged with friends. He has goals, plans and dreams including moving out on his own and being even more independent. I see a meaningful and full future for my son that, without Giant Steps as part of his journey, I know wouldn’t be there.

After graduating from Giant Steps, our son Derek graduated from high school as an Ontario Scholar, where he won a number of awards for academics and citizenship. He then went on to graduate from Ryerson with an Honours degree, Bachelor of Science in Chemistry.

Throughout his time at Ryerson, Derek worked part-time at Manulife and then worked full-time in the Accounts Payable department of the Real Estate division. Since then, Derek has worked at several other entities on a contract basis, but is currently looking for a new opportunity. An avid sports fan, Derek plays house league hockey and enjoys going to movies regularly.

Derek has developed a social network with the crew of the reality show Ink Master and was recently invited by the producers to go to Las Vegas for the finale, where they produced a video of Derek as the Ink Master “Super Fan”.

As parents, we are very proud of what Derek has achieved and it is all thanks to the early intervention, therapy, training and guidance he received at Giant Steps when he was young.

When our son Stefan started Giant Steps, his social and communication abilities were severely impaired and he was a serious flight risk.  During his elementary school years, Giant Steps was instrumental in helping us navigate the behaviours and challenges Stefan experienced and in building the many foundation skills that have enabled his success today.

Stefan is now 20 years old.  After receiving his high school diploma, Stefan is working part-time at a grocery store and is actively looking for full-time employment. He has many excellent hobbies which he uses to fill his day. He’s achieved his brown belt in karate and now attends a Master Class in karate twice a week. Stefan participates in weekly guitar lessons and plays electric guitar in a band.  He loves going to the movies, listening to music and reading. He also enjoys talking long walks and cooking with us. Stefan built lasting relationships with his schoolmates both at Giant Steps and at our local high school which serve him well today.

We believe Stefan is now living his best life, thanks to the dedicated teachers and staff at Giant Steps.